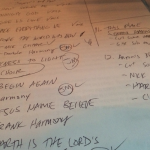 The one in which I recall noble tales of brilliant people helping refine songs.

If you look at the credits on the Living Creatures Project you will find “all words and music by Frank Hart.” This might lead you believe I created all the lyrics and musical arrangements by myself in a hermetically sealed vacuum. The truth is I had a lot of help from some very generous and talented friends shaping the final version of these songs. Songwriting abhors a vacuum.

The original list for this project had twenty potential songs. Those twenty were chosen from about ninety that I had written for congregational use during worship at CrossPoint. Sometimes people tell me they have written a song and they want me to do something with it. You know, like listen to it, record it, play it in church or something. I usually ask them how many other songs they have written. “Just this one. God gave it to me.”

Sometimes I think God might give people songs because He doesn’t want them anymore. Kind of like re-gifting.

People usually think their most recent song is their best, but it seldom is. I’m just as guilty of this as anyone. It makes sense to be excited about the newest song I have written, but I have been doing this long enough to know I will feel differently about it once it has rested a little. I will feel differently about it once I have written a couple more songs. Most people have to write a lot of songs before they can tell the difference between the keepers and the stinkers. My advice is to refrain from doing anything with a song until you have written one or two newer songs, then if you still like it maybe it’s a keeper.

So, I chose twenty from ninety, but I only wanted twelve songs on the final album.

I contacted a few friends who I believe are great songwriters and asked if they would be willing to go through the songs with me. I wanted to do it live and in person, and I wanted their spontaneous real-time feedback. Although I had recorded demos of all these songs, I wanted to sit in a room and play the songs on acoustic guitar while they looked at a lyric sheet and made notes. This would put all the songs on an equal footing, it would also remove the variables of recording quality and production choices. I wanted them to judge the song in its most simple form; lyric, melody and basic shape. Not whether or not they liked the snare drum sound.

I gave them lyric sheets and asked them to make notes on any parts of the songs that seemed weak, awkward, throwaway, cliche’, confusing, trite, needs to go somewhere else, etc.; basically anything that stuck out in a bad way.

I enjoy getting feedback on my songs from people I respect. I know some people are very protective of their songs and uncomfortable opening themselves up to criticism. That’s understandable, but I have found that I grow the most when I allow myself to be challenged.

I listened to their observations and wrote them down, I didn’t argue with them or defend my original ideas. I wanted to be able to take their suggestions and work on the songs later; looking at the places in the songs where they had made observations and deciding whether changes were actually needed or not. Sometimes I made the changes and sometimes I thought they were best left alone.

This process helped me to see the songs with a fresh perspective, it helped me to gain a little bit of objectivity.

I’ve been fortunate to have many people help find the weak spots in my writing. Sam Taylor, the producer of For Madmen Only, was very helpful in this role when we were working on Atomic Opera material. Allison Smythe, who is a great writer, poet and friend, helped me with many songs by holding up a mirror and forcing me to see my lyrics from her perspective. Dug Pinnick, Kemper Crabb, Johnny Simmons, Jonathan Marshall and other friends have also helped me find the weak spots in my songs over the years.

For The Living Creatures Project I contacted Wayne Watson, Aaron Senseman, Kip Fox and Alan Doss to help me look at the songs. I also spent an afternoon with Nick Taylor and Blake Flattley at my church office going over the songs. Here are a few things I remember from the sessions:

I first heard of Wayne Watson when I bought his album with the song “New Lives for Old” in my Bible college days. I recently met him while working on a Michael Selph record. He came over to my studio to help Michael and I look at the songs and produce the vocals. We hit it off and had such a great time working on Michael’s songs that I asked if he would be willing to help me with the new project I was working on. Wayne came over to my CrossPoint office one afternoon and I played the songs for him. One contribution I remember him making was on “Christ Before Me.” Wayne made the suggestion to cut “Christ” from the fourth line of each stanza.

Christ in my thoughts and

(Christ) on my tongue

I have known Aaron Senseman for a long time. He is one of the funniest people I have ever met. He is also a great songwriter and has written songs for Caedmon’s Call, his congregation where he is a worship leader (a church also called Crosspoint – without a capitol “P”) and his own projects. We also did a songwriting workshop together once, so I knew he had some solid ideas about how to put together a tune. He came over to my CrossPoint office one afternoon and gave me feedback while I played the songs for him.

Kip Fox is a good friend and one of my favorite worship songwriters. We use several of his songs at CrossPoint, including “This Dust,” “We Respond,” and “Free to Worship.” He lives in Arizona so we had to do our session by Skype, which worked adequately for our purposes. His feedback was very helpful to the clarity of each song. One of the many suggestions he made was in “Jesus Has Overcome the World.” The chorus used to have a line that he thought was confusing:

The line was changed to:
From heaven to be the One

Nick Taylor is a worship leader at CrossPoint, a wonderful guitar player and good friend. He has also written some great songs (that are mostly secret so far). Blake Flattley is a worship leader and singer songwriter who was the frontman for The Orange Effect and has released a few solo projects. I spent an afternoon playing the songs for them and going over the lyrics and melodies with a fine toothed comb, looking for whatever bugged them.

Alan Doss is a long time friend and musical collaborator. I asked him to co-produce the project, we also recorded the drum tracks, mixed and mastered at his studio. I’ll talk more about the recording and mixing process in the next article, but I want to include him here for his contribution to the song’s essentials. Alan was great at pointing out lyrics that sounded unmusical, he also has a keen instinct for when parts of a song should be repeated more, less, or need some harmonic variety. One example is in the song “Jesus, Give us Love.” The chorus used to happen after the second verse and then a double chorus after the fourth verse. Alan said, “I think you should do all the verses and save the chorus for the end. Once you start singing that chorus I just don’t want to go back to the verses, I want to keep singing the chorus.” So that’s what we did. I couldn’t have done this project without him.

I owe the musical clarity of the arrangements and lyrics to these guys, they were willing to lend me their talent and insight. Seeing the songs from their perspective allowed me to have enough distance to be able to choose the twelve songs that fit together for this project. Thank you, friends!

If you are curious what the album actually sounds like, you can find it on iTunes, Google Play, Amazon or CDBaby.

CLICK TO READ THE FIRST ARTICLE IN THIS SERIES.

NEXT ARTICLE IN SERIES